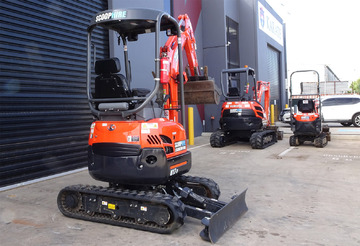 Mini excavators are akin to rising stars within the realm of construction projects due to their distinct set of advantages for projects that are small in scale and tight with working space. This includes projects that are considered as ‘light projects’ within the scope of the industry which includes home renovations projects, backyard pool building, and demolition of small structures and even landscaping.

Mini excavators are seen as the perfect ‘machine element’ for such projects due to their robustness, cost effectiveness and flexibility offered due to the ability of these machines that can be fitted with a variety of additional attachments to perform different tasks.

These attachments practically transform these mini excavators into multi-purpose tools that allow project managers to use them for tasks that go beyond their traditional applications. The fact that attaching these different attachments can be done under one minute due to the hydraulic coupler system that come with the latest ranges of mini excavators have made these machines very popular among smaller construction companies.

Most of these companies often rent mini excavators on hourly or daily basis due to their lower cost compared to human labour and their much more effective use of time. Mini excavators are able to perform the work of 5 adult workers working for 8 hours in 2 hours at the most, as an example even for demolition work which would require workers to break concrete using jackhammers and stone cutters, who would later need to clean up whatever they demolished could be accomplished by a mini excavator within an hour.

From undertaking jobs that requires the demolition of concrete walls or retaining walls to laying garden paths that requires the earth to be compacted, using mini excavators would be the best way to executing the job quickly, neatly and thoroughly in much lesser time. All that a single operator of the mini excavator would need to do is attach the appropriate attachments such as a concrete breaker or a ground compacter to the coupler system and the job will be done in a jiffy.

Other attachments that these excavators could also take on include rippers or pulverisers that are used to breakup large pieces of debris in smaller debris which would make managing them much easier during clean up.

The practicality of these machines adds a significant level of flexibility to the construction jobs and given the fact that the grounds around residential areas are fragile and soft, these mini excavators that are light weight cause minimal damage to the ground.

Some mini excavators hire machinery even come with rubber tracks that do not damage landscaped grounds or masonry apart from the fact that some even have track adjustable features which allow them to be used on narrow paths when moving around.

Zero swing features also allow these machines to be used in very tight spaces and handle demolition, digging or clean-ups very effectively even when compared to raw labour.