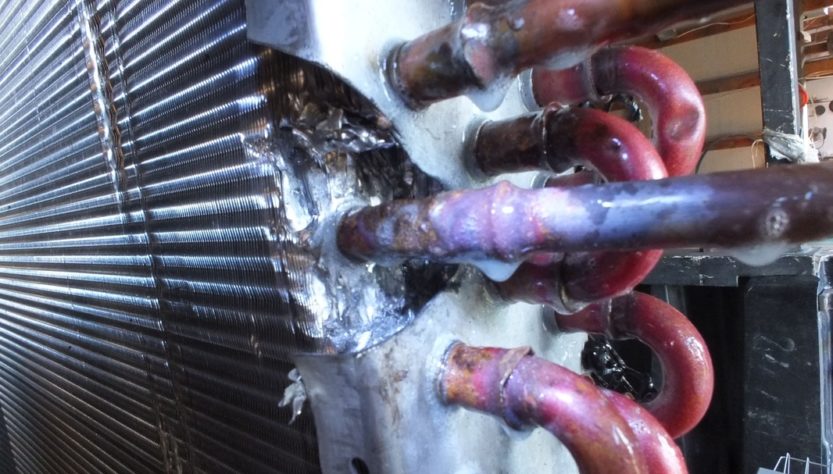 Right from the factory line, most HVAC system today come prefilled with the right amount of refrigerant necessary for proper functioning of the system. However, due to leaks and the accompanying system inefficiencies, many homeowners and business owners will have to refill their HVAC’s refrigerant several times over its lifetime.

Leaking refrigerants are very dangerous, both in the short-term and long-term. As such, whether the leak is occasioned by poor installation, a factory defect, or the formaldehyde corrosion of the copper lines, you should be very concerned when you have a leak. Herein we will explore the most notable dangers that result from leaking refrigerants. As such, you will fully understand and appreciate why a leaking system should concern you very much.

Dangers Of Refrigerant To Human Being

Exposure to refrigerants can be dangerous to human beings. The chemical makeup of all refrigerants gives these chemicals the ability to affect the skin, the eyes, the breathing system, and even other internal organs, hence why they are regarded as toxic. Whether the refrigerant of choice in question is Freon or the next generation of refrigerants such as carbon dioxide and ammonia, there is a health risk that comes with refrigerants.

Furthermore, it is important to note that even in cases limited exposures to refrigerant for the first time are still risky. The severity of risk increases even further when it comes to long-term exposure. As such, it is important that you reduce your exposure to these chemicals as much as possible, both in the short- and long-term.

In the case of short-term exposure, the affected person will exhibit: breathing problems, coughing, vomiting, nausea, dizziness,throat, eye, and or ear irritations, chemical burns on the skin, and frost bites. In the case of severe exposure to refrigerants, the affected person will exhibit: bleeding in their lungs, fluid buildup in the lungs, vomiting blood, irregular heartbeat,        decreased mental capability and capacity, loss of consciousness, difficulties in breathing and burning sensation in the esophagus, and seizures.

With the above in mind, in the case of extreme refrigerant poisoning, the first course of action is to get fresh air. This means getting out of the environment where the refrigerant is in high concentration. This should be followed up by calling emergency services providers.

Typically, the affected individuals will be sent to the emergency room, where his or her injuries are treated. The treatment may include getting oxygen through breathing tubes, gastric lavage, surgical treatment of damaged skin and burns and medication and drugs to treat some symptoms.

As you can appreciate, there is a serious danger of having leaking refrigerant in your home or place of business. Moreover, in worse case scenarios, the refrigerant leak can cause life-long injuries that will affect your quality of life henceforth.

Dangers Of Refrigerant To The Environment

Aside from the health risk that leaking refrigerants pose people in and around the property, the leaks also pose a grave danger to the environment. Essentially, the leaks add chemical substances to the atmosphere that have a certain degree of potential to alter the atmospheric system.

For instance, Freon, which is a chlorofluorocarbon (CFC) refrigerant is renowned having a high Global Warming Potential (GWP). This means that the gas will exacerbate the problem of global warming when released to the atmosphere. Other refrigerants such as HFCs are renowned for having a high Ozone Depletion Potential.

That is why there is a global movement towards moving to refrigerants that cause little to global warming, ozone layer depletion or any other environmental degradation. Some of the next generation refrigerants such as carbon dioxide and ammonia have been found to have very little if any effect on the state of the atmosphere. Therefore, there are much environmentally safer and in-line with the global goal of going green.

Dangers Of Refrigerant Leaks To Your HVAC System

While the most concerning the danger of leaks concern your health and the environment, there are also dangers a leak poses to your HVAC system. An HVAC system is designed to operate with a certain amount of refrigerant running in the refrigerant lines. In the event of a leak, the HVAC system is placed under severe pressure. This is especially the case with the compressor, as it not able to convert the right amount of gaseous refrigerant to a liquid state. As such, it overworks, trying to compensate for the lost capability. This enormous pressure reduces its life while at the same time, it does not condition your home efficiently.

Furthermore, the pressure on the compressor is transferred to other parts of the HVAC system. In fact, a leak causes a system-wide failure in which every part of the system suffers some damage that affects its functionality.

Unfortunately, identifying leaks is not an easy and straightforward task to handle. For starters, there are numerous leak detection methods, including a visual inspection, bubble test, halide torches tests, and nitrogen pressurization tests. Moreover, these tests are not applicable to all systems. Every HVAC system can only use certain tests. Beyond the tests, repairing the leaks requires specialized skills.

As such your HVAC system suffers from a refrigerant leak, you need to hire the best and most experienced HVAC specialists in the business.  Only with the best workmanship with regards to HVAC leak detections and repairs will you mitigate the dangers of leaks and negate or even do away with future leaks.