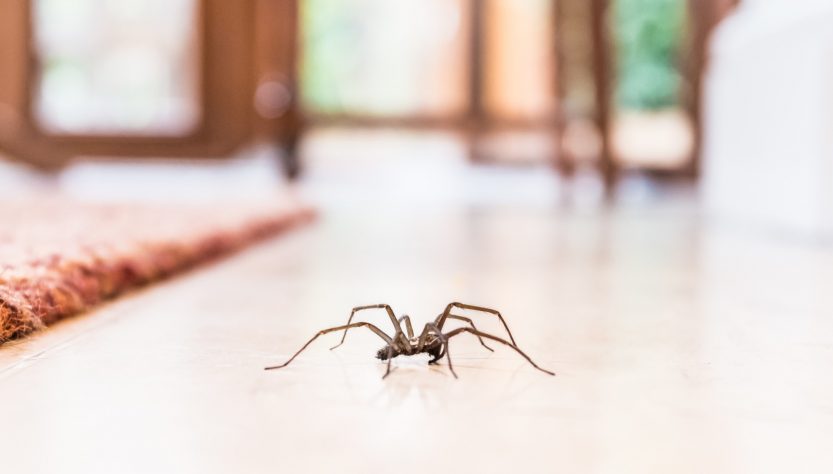 Today, there are over 45,000 known species of spiders! And in North America alone, you’ll find around 3,400 of those species.

The majority of spiders live outdoors, but as you might already know, some do like to come inside. After all, it’s nice and warm, and if you have other pests (such as flies), there’s plenty of food as well.

What’s good is that in most cases, spiders are an asset to your house. But in some small cases, they can pose a threat to your household.

Read on to find out the different types of spiders you might find in your home.

Let’s start off the list with a spider that you’ll typically find inside! The word “house” is in its name, after all.

This is the type of spider that leaves cobwebs all over your house. They have a rounded abdomen, are brownish or grayish in color, and grow to about the size of a nickel. They’re also comb-footed, which gives them a distinct look.

The good news is, the American house spider is harmless. The most effect they’ll have is annoying you with the many webs they’ll make around the house.

So in most cases, you won’t really have to do anything if you find American house spiders; you can coexist peacefully.

This is another brownish or grayish spider that’s found in people’s houses. However, it’s practically the exact opposite of the American house spider.

These kinds of spiders are found in 15 states and love to stay in homes. Common places you’ll find them include crawl spaces, between walls, attics, basements, and in furniture.

If you have these spiders in your house, you’ll want to call a pest control company like AltusPest.com. As we’ve noted before, brown recluses are the exact opposite of American house spiders.

These spiders have venom that can produce serious side effects if you’re bitten. This venom especially poses a threat to smaller children, meaning that if you have kids in the house, they can have life-threatening symptoms as a result of a brown recluse bite.

By calling a professional pest control company, they can safely remove brown recluse spiders from your home and also help you keep them out.

As their name suggests, wolf spiders are some of the largest spiders you’ll find in your home. These spiders are actually very beneficial for keeping away other pests, so much so that they’re a commonly kept pet.

Wolf spiders are black, brown, or grayish in color. They’re often bigger than an inch long and they have a long body with hairy legs. They look a bit similar to brown recluse spiders, but aren’t very dangerous to humans. Again, they’re fantastic at keeping away pests.

They do produce venom and will bite people if threatened. However, they’re harmless in the majority of cases. But if you have a known allergy to spider bites, you might have more adverse reactions than most other people do.

This name might sound strange to you, but we’re betting you’re quite familiar with these spiders. They’re also referred to as daddy longlegs! However, you should know that they’re actually not the real daddy longlegs, although they look quite similar.

The long-bodied cellar spider is either light brown or gray in color. It’s pretty small, has a round body, and long, skinny legs (which is why many people mistake them for daddy longlegs).

This is a non-venomous spider, which means it shouldn’t pose a threat to you or your family members. It’s best to leave them alone, as they’ll help control the population of pesky flies.

Jumping spiders can be quite terrifying for people. If you already fear spiders, it’s even scarier to think that some can literally jump on your face!

Jumping spiders come in a variety of colors, such as brown, black, and gray. They’re about an inch long in length and have hairy legs, including ones that are a bit longer in the front.

These are spiders that are active during the daytime, so you’ll often spot them around while you’re awake. They hang out on walls, windows, and screen doors.

You’ll definitely notice them when they get around, considering they jump around! This is because they’re looking for prey to chow down on.

Jumping spiders can definitely bite people; most relate it to bee stings. They do have venom, but for the majority of people, it’s harmless. If you have an allergy to bee stings, then it’s very likely that you might as well to jumping spider bites.

Know About the Different Types of Spiders Around

Now that you know about the different types of spiders found in homes, you’ll have a better idea of what to look for. While in most cases, spiders are friendly and help keep other pests away, there are some that can be harmful to your family.

So make sure you get in touch with a pest control company if you notice any spiders in your house, especially dangerous ones. They’ll be able to take care of the problem, plus put together a preventative plan for you so these house spiders are less likely to return in the future.

Did you like reading this article on the types of spiders found in homes? Then find more interesting reads by browsing our blog now!